Even though I’m a dog person, I have two cats. I adopted them almost nine years ago. A friend of a friend of a then coworker had saved them from being euthanized at a shelter, but was unable to keep them long-term. I was dealing with a rodent problem at the time, so taking them in seemed like a win-win scenario. The cats would get to keep all of their nine lives, and I’d get mouse-repellant—in duplicate.

Especially since they were siblings, I wanted to give my two cats a pair of names that went together—Bert and Ernie, for example. I also liked the idea of one of their names being preceded by a title or honorific (think Lady Grantham or Mrs. Piggle-Wiggle). The female cat had already been dubbed Kerry at the shelter, and with Sex and the City so much in the cultural ether then, I decided to name them Carrie and Mr. Big.

My husband-to-be was not a fan of the names I’d chosen, especially when he was called upon to explain their origins. In an attempt to appease him (since they would eventually become his cats as well), I endeavored to rename Carrie and Mr. Big. A longtime fan of C.S. Lewis, I tried dubbing them Mr. Tumnus and Lucy. I thought giving my cats new monikers would be easy. Dogs are renamed every day, and it’s not like cats come when you call them per se.  It made no difference to the cats, but change proved difficult for the humans. And it didn’t help one bit that Mr. Big had by then grown so large that the humor added by the accuracy of his name was simply irresistible.

Aside from their both being massive in size, Carrie and Mr. Big could scarcely be more different. Carrie is much more curious and willing to approach the strange and foreign. Although they both seek refuge behind the couch at the sound of visitors, she is much more likely to eventually venture out.

I’m pretty sure that Carrie has the cat equivalent of a deviated septum—or perhaps she’s allergic to people. She tends to snore when she’s sleeping, and her nose is often runny. Every once in a while she’ll sneeze on one of us. For the record, cat snot is pretty disgusting.

Mr. Big is shy and easily frightened. He is literally a scaredy-cat. But it isn’t entirely his fault. Between the two of them (with the exception of the spayed versus neutered inequality) he has endured more trauma.

When I first brought Carrie and Mr. Big home, the house I lived in had a mouse problem. Then my neighbors began a major renovation in their basement, and our mouse problem became exponentially worse. The mice left. How could that be worse? The mice left because a rabble of rats took over.

I could rant about rats, about how they’re disgusting and diabolical, but I’d never get off that tangent. So suffice it to say that our rat problem was blessedly short-lived, but that giant glue traps were a part of their expulsion. And therein lay Mr. Big’s first trauma. One day I simply couldn’t find him. Then I heard the faint cries of a kitten in distress. I noticed the basement door was ajar (a door which I’d given all in the house strict instructions to keep shut). I followed the sound of his woeful meows, and there he was.

Mr. Big had gotten himself stuck in a giant rat glue trap—apparently they’re equally effective at immobilizing kittens. He looked so pathetic. It was clear what had happened. In a moment of bold curiosity, he had ventured through the usually closed door to the basement and begun to explore. He had come across something new, and as most animals are wont to do, had tried to smell it. In sniffing this strange new thing, perhaps too intently, he had gotten his nose stuck to it. He must have then tried to use each of his paws in successively vain attempts to gain leverage and push himself off. Unfortunately, for all of his efforts, he had only succeeded in getting himself more stuck—from his bicolored nose to the soft pink pads of his paws to the white fur of his belly. And as if getting stuck wasn’t bad enough, he then had to endure the secondary trauma of a bath and a very patchy haircut.

When we had the fire in our building, Carrie was rescued rather quickly. I imagine she emerged from her hiding place as soon as she heard the firefighters enter the apartment, and willfully submitted to being put in the pet carrier and carried to safety. Unfortunately, Mr. Big spent three or four more hours than Carrie did hiding in the cold, wet, smoky apartment. His smoke inhalation led to a serious respiratory infection. This meant multiple visits to the vet. Visits to the vet meant car rides in his cat carrier. Each time we moved him (whether the trip lasted fifteen minutes or an hour), Mr. Big either pooped or peed on himself—or both. The trips literally scared the crap out of him.

Mr. Big had to be given a lot of baths, two for every day we moved him. Most cats don’t like baths. Mr. Big is not the exception. Worse than the baths, however, were the pills. Cats are not dogs. You can’t just hide a pill in a piece of meat (or something they like) and have them eat it without even knowing they’ve been dosed. And if you try to crush their pills into their food, then you have to make sure they eat every bite of it. This is harder to do when there are two cats, only one of them needs the medication, and he doesn’t have much of an appetite because he can’t smell anything due to his respiratory infection. The only way to be sure that the right cat gets the full dose is to force the issue. You have to pry their jaw open and stick the pill so far down their gullet that their gag reflex is initiated and swallowing becomes their only option. So twice a day we had to bring Mr. Big out of hiding and power a pill down his throat. We also had to give him eye drops—a simple task by comparison. 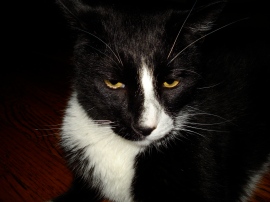 2 thoughts on “My Two Cats”